Power from on High: The Development of Mormon Priesthood by Gregory Prince

This didn't do a whole lot for me; I'm not entirely sure why. I ended up just skimming most of it.
Posted by Julie M. Smith at Thursday, August 31, 2006 No comments:

Standing in the Rainbow by Fannie Flagg

I'm not sure how I felt about this: the plot was loopy and meandering, but the characters were somewhat endearing. Eh.
Posted by Julie M. Smith at Wednesday, August 30, 2006 No comments:

The Twelve Little Cakes: Memoir of a Prague Childhood by Dominika Dery

This was a good story; I wouldn't bet the farm on every anecdote being 100% accurate, but this was an enjoyable read despite my slight distrust of the author.
Posted by Julie M. Smith at Sunday, August 27, 2006 No comments:

The Book of Revelation by G. K. Beale

At over 1200 pages, this was a good commentary. If it had had an excellent editor and 700 pages, it would have been a great commentary. In other words, it was a little flabby.
Posted by Julie M. Smith at Sunday, August 27, 2006 No comments:

The Book of Revelation by Robert Mounce

This book has confirmed my suspicion (after doing Leviticus and parts of Ezekiel as well) that NICOT/NICNT is the single best commentary series around. This title was great--amazingly concise and yet filled with great stuff. Recommended for anyone who wants to study Revelation.
Posted by Julie M. Smith at Sunday, August 27, 2006 No comments:

This is a fabulous and important book. Brooks is up there with Laurel Thatcher ulrich in my pantheon of heroes: Mormon women who persued their academic interests while raising their families. Her story is fascinating and her work on the Mountain Meadows Massacre is of lasting importance. This book had just a little flab that could have been trimmed, but is still highly recommended.
Posted by Julie M. Smith at Sunday, August 20, 2006 No comments:

It's that time again. Here's what I took to Half Price Books today:

Molecules at an Exhibition by John Emsley

The Sleepwalkers by Arthur Koestler

Patenting the Sun by Jane Smith

Walk on Water by Michael Ruhlman

The Prize Winner of Defiance, Ohio by Terry Ryan

The Tipping Point by Malcolm Gladwell

The Handmaid's Tale by Margaret Atwood

The Devil in the White City by Erik Larson

The Good Earth by Pearl Buck

In a Sunburned Country by Bill Bryson

Honeymoon in Purdah by Alison Wearing

The Secret Life of Bees by Sue Monk Kidd

The Emperor of Ocean Park by Stephen Carter

The Lovely Bones by Alice Sebold

Crossing to Safety by Wallace Stegner

Lindbergh by A. Scott Berg

Cheaper by the Dozen by Frank Gilbreth

The Kite Runner by Khaled Hossenini

Bodies in Motion and at Rest by Thomas Lynch

Unto the Sons by Gay Talese

Ship of Gold in the Deep Blue Sea by Gary Kinder

The Girl in the Picture by Denise Chong

Kingdom of Children by Mitchell Stevens

The Island of Lost Maps by Miles Harvey

Dust Tracks on a Road by Zora Neale Hurston

Their Eyes Were Watching God by Zora Neale Hurston

Why We Eat What We Eat by Raymond Sokolov

The Poisonwood Bible by Barbara Kingsolver

Under the Tuscan Sun by Frances Mayes

The Undertaking by Thomas Lynch

This was OK, but just OK. I'm not sure how much to blame the commentaries I read and how much to blame Isaiah, but this was a very disappointing experience for me. It may be that the Book of Mormon led me to expect to get so much out of Isaiah, and it just didn't happen. It may be that I was expecting to 'get' Isaiah in a way that I hadn't before, and that (despite the hundreds--thousands--of pages I read) didn't happen. I don't know. In any case, this is the first time that I have studied a book in depth only to like it less at the end than I did before. Again--whether the fault belongs to the commentaries I read or other factors, I can't say. But I'm sure glad I'm done with Isaiah.
Posted by Julie M. Smith at Saturday, August 12, 2006 No comments:

The Prophecy of Isaiah by J. Alec Motyer

This is a solid commentary. I wish he had spent a little less time defining words, and there is a certain 'spark' I get from the truly great commentaries that wasn't here, but this was OK. If it sounds like I'm darning with faint praise, it is because I am.
Posted by Julie M. Smith at Saturday, August 12, 2006 No comments:

This is the only LDS commentary that I have ever read that is worth recommending. I think he occassionally adopts traditional LDS positions that don't have enough to support them, but for the most part, this is responsible scholarship. At the same time, I think it only removes about 40% of the Isaiah fog--readers who want more than that will be disappointed.
Posted by Julie M. Smith at Saturday, August 12, 2006 No comments:

Misquoting Jesus: The Story Behind Who Changed the Bible and Why by Bart Ehrman

This is an important and fabulous book. Very little of the material was new to me, but it was still a very useful read to have a basic introduction to textual criticism wrapped up in a nice, neat little package instead of scattering all over--the way that I picked it up in school. While this book would be a killer for someone who thinks the scriptures are inerrant, I think a fairly conservative Saint could handle it--the confirmations of the Church's attitude toward scripture ("insofar as it is translated correctly" and "corrupt and designing priests" come to mind) will be enough to tide them over through the tough parts. (I don't think most people know that the story of the woman taken in adultery is not original to the text.) This book is highly recommended to anyone with any interest in the Bible and is essential reading to anyone who wants to seriously study the scriptures.
Posted by Julie M. Smith at Thursday, August 10, 2006 1 comment:

The Mommy Brain: How Motherhood Makes Us Smarter

I just wasn't that interested in this. The thought that chemical changes brought on by pregnancy, lactation, and mothering might permanently change brain chemistry is certainly interesting, but I don't think there is enough data to really make her case. One can only read the phrase 'rat mother' so many times . . . and then the obligatory liberal-agenda-to-make-working-motherhood-painless at the end was extremely annoying.
Posted by Julie M. Smith at Thursday, August 10, 2006 No comments:

Brother Lyon, along with Lowell Bennion, taught at the U of U Institute in its formative years and represented an early, liberal strand of the CES. Lyon and Bennion left the U of U under unpleasant circumstances in 1962. T. Edgar Lyon's story may not be for the generalist, but it captures important data points in the growth of CES and the dramatic changes that affected the Church throughout the twentieth century.
Posted by Julie M. Smith at Sunday, August 06, 2006 No comments:

The Lemon Tree by Sandy Tolan 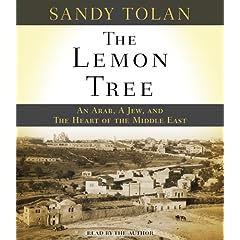 I listened to this on our Utah trip; it was phenomenal. I suppose I was expecting a quaint story of how a Jew and a Palestinian became friends; their tortured friendship is about ten percent of the book--the rest is a concise and fascinating history of Israel/Palestine. I had no idea how much I didn't know until I listened to this. Highly recommended.
Posted by Julie M. Smith at Friday, August 04, 2006 1 comment:

(I reviewed this a few weeks ago but apparently my review is lost in cyberspace.)

This was a tremendous book--absolutely required reading. King Leopold of Belguim was a fascinatingly diabolical character and his exploitation of the Congo was beyond belief. And, as if all of that isn't bad enough, as the story is winding down and things seem to normalize, we find out that the CIA killed the first democratically-elected leader of the Congo. Unbelieveable. This well-written tale is much stranger--and more interesting--than fiction.
Posted by Julie M. Smith at Thursday, August 03, 2006 No comments:

Morning by Morning: How We Homeschooled Our African American Sons to the Ivy League by Paula Penn-Nabrit

This was disappointing. I suppose I imagined a WTM-type book, but this was short on details and long on her tale of racial woe. I 'get' the idea that the real problem in this country is that if you are a minority, you never know if the waitress' rudeness is because of her or because of you, but I seriously doubt that the stewardess who saw her family sitting in first class and asked, "What are they doing here?" was making a racial statement. Unless they were flying Confederate Air, I suspect such sentiments (which may very well exist) would at least be kept under wraps. In any case, there were a few interesting tidbits about homeschooling in general and about the juxtaposition of homeschooling and racial issues, but for the most part, this felt like a moralizing rant. Not to mention a bit of false advertising: How could that subtitle neglect to mention that one of those sons was kicked out of Princeton? Which brings us to a bigger issue: apparently their effort to have [almost] exclusively African or African-American male tutors backfired. This almost turns the book into a cautionary tale, but you'd never guess that from Penn-Nabrit's tone.
Posted by Julie M. Smith at Thursday, August 03, 2006 No comments: