The Beginning of Wisdom: Reading Genesis by Leon Kass

I've read about a dozen commentaries on Genesis now; this one is by far the best. Which isn't to say that it is perfect (I thought the handling of the Joseph cycle was a little weak) but--wow!. If you read only one book on Genesis, this should be it.
Posted by Julie M. Smith at Monday, November 19, 2007 4 comments:

In the Beginning by Karen Armstrong

This was one of the less interesting biographies that I have read. I also think that Poll may have overplayed his loss of power, but I'm not convinced either way.
Posted by Julie M. Smith at Monday, November 12, 2007 No comments:

The Odyssey retold by Geraldine McCaughrean

I pre-read this for Simon's history reading. I thought it was wonderful and would make an excellent read-aloud for kids as young as five. Kids 8+ could read it themselves.
Posted by Julie M. Smith at Saturday, November 10, 2007 No comments: 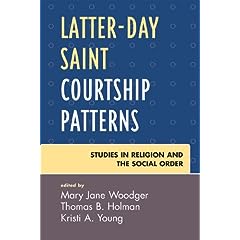 Latter-day Saint Courtship Patterns is part of Studies in Religion and the Social Order, which is edited by Jacob Neusner. Many interesting tidbits gleaned from the data would make fun discussion topics (only 22% of BYU men and 29% of BYU women expect that a “spiritual confirmation” will help them know when they have found the person they should marry; 60% of BYU freshman think it is wrong to kiss on the first date while only 20% of older students thought the same). But it is hard to overlook the major flaw of the book: every study which included information about its survery population indicated that the participants were all BYU students (or high school students from the Orem and Springville areas). For those studies where the institutional affiliation(s) of its participants were not mentioned, every indication is that they also were BYU students. (One of the folklore essays did indicate that one-third of its participants were from outside of the “Mormon belt.”) So the book is, I think, improperly titled: it isn’t about LDS courtship patterns or even American LDS courtship patterns, but rather about the courtship patterns of BYU students. I’m guessing those aren’t coterminous groups. Not only do I have philosophical objections to letting BYU culture stand proxy for the Church, but a non-LDS researcher who approaches this work will be left with the impression that “creative dating” is a Mormon thing, not a Jell-o Belt thing. And while I’m not a sociologist, some of the research methodology seemed suspect to me, such as comparing the opinions of BYU students to a national sample of high school students. Similarly, a few studies used ‘grounded theory,’ which not only seems to have the potential to find nothing other than what the researcher wanted to find, but in the case of the essay on females in relationships seems (based on the quotations provided, which don’t support the hypothesis) to do just that. It is hard to take seriously conclusions based on interviews with only fifteen different subjects or a four-page piece on wedding receptions. I find sociological research on the Church and its members fascinating and hope that this book will pave the way for more work in the field–work that has larger, more diverse samples and more rigorous methodology.
Posted by Julie M. Smith at Friday, November 02, 2007 No comments: 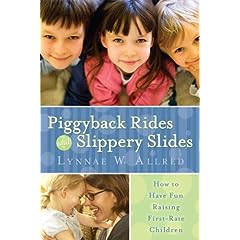 Do you really need to read a book on how to play with your children? Maybe. Lynnae W. Allred’s new book, Piggyback Rides and Slippery Slides; How to Have Fun Raising First Rate Children, may not exactly be a necessity, but it could be a blessing. In a world where people enroll their three-month-old babies in classes and buy phonics toys for infants, it is safe to say that some parents don’t have a clue as to what is developmentally appropriate or necessary for children. To the extent that this book will help parents who need a little help fending off today’s excesses of hyper-parenting (or who didn’t see good parenting modeled by their own parents), it is, as Martha would say, a good thing. It also has some innovative ideas on making chores and that sort of thing more fun (hint: turn out the lights and aim your searchlight [flashlight] at the grenade that is about to explode [toys, dirty clothes] and see if your child can defuse [put away] it before it explodes in ten seconds). I wasn’t thrilled with her hyperbolic and over-generalized description of the differences between how fathers and mothers play with their children, but I was very pleased with her critique of over-scheduling.
Posted by Julie M. Smith at Friday, November 02, 2007 1 comment: 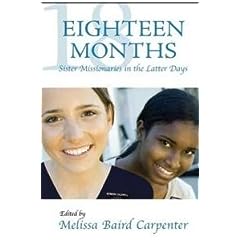 Eighteen Months: Sister Missionaries in the Latter Days, edited by Melissa Baird Carpenter, is a “collective memoir” of the mission experiences of many sister missionaries, including T& S's own Rosalynde Welch. Most essays succeed marvelously in hitting the sweet spot of spirituality without succumbing to the saccharine; we are introduced to the bulimic companion and the golden investigator and both are made equally real. While not all essays evince the best writing style (and a fair number of typos mar the book as well), the genuineness of the stories overcomes these flaws. From ruminations on how the local transvestite manages to keep his makeup immaculate in the humidity to visiting a new convert in prison, it’s all here and it’s well worth reading.
Posted by Julie M. Smith at Friday, November 02, 2007 No comments:

I don't know that I've ever read a book that was such a mix of fascinating detail, notably good reading, and dry-as-dust detail.
Posted by Julie M. Smith at Friday, November 02, 2007 No comments: